Pre and post images - useful or misleading? Don’t be fooled by the trickery….! 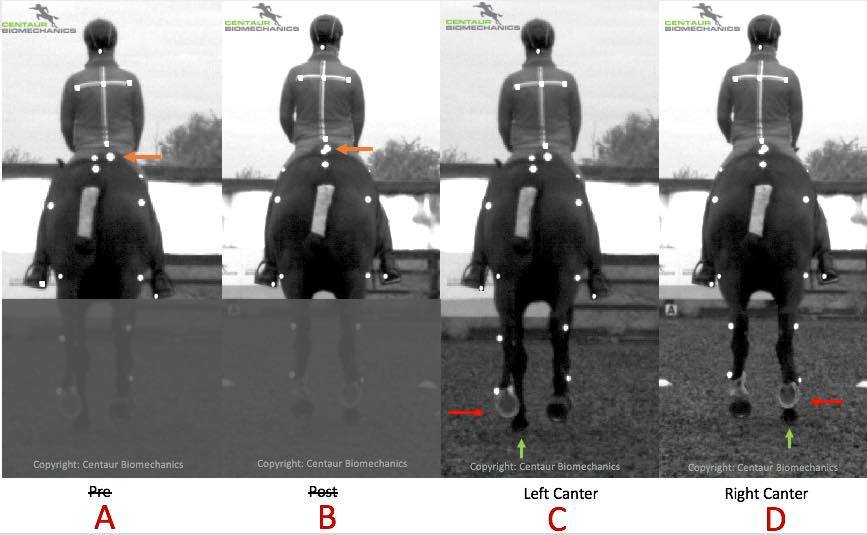 In image A, the saddle is slipped to the right (orange arrow) and the rider is shortening through their left side with their seat displaced to the right. In image B, the saddle is straighter and the rider has an improved position as a result of the “intervention” – or is this a trick….? With reference to images C and D (same as the previous images, but now the limbs are visible) it can be seen that the horse is on different canter leads (image A and C = left lead and image B and D = right lead) - look at the orientation of the hoof.

In the above scenario, riders may see these two images (A and B ) and believe the “intervention” has resolved the saddle slip and that their position is improved. The differences here, are as a function of the horse being on the opposite rein and the directional effects on locomotion and biomechanics. In addition, saddle slip generally only occurs on one rein.

The greater concern is if riders believe an intervention has worked, and it hasn’t. In these cases, the rider is likely not to address the underlying mechanics as to why the saddle is slipping. Evidence from (Greve and Dyson), and our own (MacKechnie-Guire et al.) has shown that the horse is the contributory factor for inducing saddle slip with the rider following the movements of the saddle and horse. It is appreciated that there are a small number of riders who may induce saddle slip however, in the majority of cases it is initiated by the horse due to multiple reasons - lameness, functional asymmetry, laterality, seasonal effect, travelling etc. research is ongoing to understand further.

The purpose of this blog is to raise awareness, I recently received a pre and post image from a rider. This rider was not advised nor did she think to explore the underlying mechanics as to why the saddle had initially slipped as the intervention had “fixed” the problem. A few months later, the rider was still crooked and the saddle slip was more evident– what long term effect did this have on the horse+rider….?

Saddle slip is something that requires a detailed understanding of both equine biomechanics and the interaction between the horse, saddle and rider. Correcting saddle slip is something that requires a team approach (all or some) veterinarian, saddle fitter, farrier, coach, therapist, biomechanist, horse+rider physio etc. along with regular monitoring and saddle fitting checks. Importantly, saddle slip can be an early indicator of movement asymmetry hence it is essential that it is addressed in order to limit further asymmetries developing.

I hope the above post helps. I am a massive advocate of using technology to help support horse + rider performance but the interpretation of information / findings is crucial and if performed incorrectly can be misleading and in the scenario presented here, could have a detrimental effect on the horse+rider.

For meaningful comparisons to be made, the horse+rider need to be on the same rein, same moment in the stride cycle and same gait.

What effect does this have on the horse?

Video A - it can be seen that the left side of the saddle panel is brought up close to the midline of the horse (spine). This results in increased saddle pressures on the left side of the horse’s back, compressing the back muscles on the left. The horse’s limbs (front+hind) are loaded asymmetrically as a result of the asymmetric positioning of the saddle+rider.

What effect does this have on the rider?

Video A - the rider’s pelvis slips to the right (with the saddle), as a result, their upper body then shortens to the left, the rider’s left knee becomes tight and the right leg becomes straight. This is often easy to see, as the stirrup (on the side that the saddle has slipped too) “appears” to be longer however, this is a function of saddle slip not an asymmetry in the rider’s limbs or stirrup leathers. Lastly, rider’s may have an asymmetric rein tension, as a result of the rider trying to maintain stability.

As mentioned, saddle slip is generally only present on one rein, therefore all of the ridden work on that rein will be compromised – straight line, circling, half pass, jumping turns etc.

Why does saddle slip occur?

There are multiple factors that influence saddle slip, there is evidence that saddle slip occurs as a result of lameness (Greve and Dyson, AHT/RVC). Saddle slip can also occur in non-lame horse’s (MacKechnie-Guire et al, . RVC). What is interesting, from our studies and others, saddle slip appears to be initiated by the horse and not the rider. Riders will follow the movement of the saddle but don’t necessarily cause the saddle to slip – more on that in another post. Research groups are investigating additional factors which could cause saddle slip – more on that in due course.

Horses seek a locomotor pattern to alleviate any discomfort caused by a saddle. In this case, how can a saddle which is slipping to one side be of benefit to the horse? This locomotor pattern, can lead to increased asymmetry in the horse and rider, coupled with the asymmetric forces creates a vicious circle.

I am a huge advocate of working as a team, therefore, in cases where saddle slip is present, it is essential that this is discussed with the acting saddle fitter in conjunction with the veterinarian, coach, equine/human physio, farrier, biomechanist, therapist etc. Saddle slip requires a team approach with regular saddle assessments to monitor progress etc.

I hope the above notes are useful.

Please share to create awareness of the importance of addressing saddle slip AND help with saddle slip recognition, as in cases where the saddle is straight and then starts to slip could be used as an early indicator of movement asymmetry occurring!

Next post will be how to identify saddle slip and who is the primary cause – horse or rider!